You are Donating to: HiHEA Donate 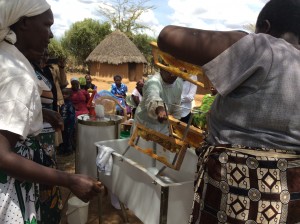 Beekeeping in Africa and especially in Kenya is a domain that is widely practiced by the old; mostly men. Many youths have shied away from this trade which is earning thousands of shillings for rural farmers while at the same time changing their livelihoods for the better. But for youths from Baringo County in Kenya, this is one venture that they are very excited about. This is after Hand in Hand Eastern Africa (HiH EA) rolled out an initiative known as the Baringo Honey Value Chain. The project is helping promote beekeeping as a commercial venture for sustainable livelihoods as well as ensure food security, promote more tree-planting than tree-cutting, and encourage agro-forestry programmes to flourish.
In 2015, Hand in Hand Eastern Africa entered into a partnership with the African Beekeepers Limited (ABL) a private company working for the development of the beekeeping and honey industry in Kenya. ABL’s role in the value chain is to train HiH EA members and staff about modern beekeeping and honey production techniques as well as supply bee keeping equipment. ABL also helps the bee farmers in inspecting their high-tech bee hives.

A group of 17 women from Kipsogon, Baringo County are breaking barriers and setting the trend by demystifying the myth that beekeeping is a man’s role. The women aged between 24 and 70 years have embarked on beekeeping as their commercial activity that will enable them improve their incomes and be able to provide for their families. The women all under the Weseyo women group are beneficiaries and members of Hand in Hand Eastern Africa beekeeping initiative that aims at encouraging members to take up the beekeeping venture as a commercial activity as well as tapping the honey potential in Baringo County. Hand in Hand Eastern Africa is an NGO, whose vision is to alleviate poverty through enterprise and job creation.
Before starting the beekeeping business, the women attended advanced training forums on capital requirements, how to construct hives how to use machinery for higher production, honey harvesting, packaging and marketing. The honey initiative for Baringo complements the organization’s goal of encouraging self-reliance for the poorest people in the rural areas. Each of the members has bought a Langstroth beehive that is known for higher production of honey as well as been easy to manage compared to the traditional beehives. “We never knew that we could own beehives because traditionally it is a man’s job and many of us women were afraid to start the venture. Through the trainings we have received information that we did not know we could get and we look forward to our first harvest,” says Pascaline Cherotich, the chairlady of the group.

The women are so serious into the business that they have jointly bought all the honey harvesting equipments such as the centrifuge machine for extracting honey, a bee suit, a honey strainer, the uncapping fork and tank and the bottling bucket. “We will hire these equipments to other groups who would want to harvest honey and get additional income as a group, says Pascaline.
The group has trained and hired a young man who will help them in honey harvesting.

Baringo County’s ecosystem is favorable for beekeeping because of the natural forests and vegetation. Far from that individual group members have started small enterprises on the side such as detergent making, cake baking and fruit selling to help supplement their incomes. They also operate a table banking whereby they loan each other money to help them expand their businesses. This has an overall effect of turning around their livelihoods as well as provide food, clothing, quality healthcare and school fees for their dependants.
The organization has invested over KES 3 million into the Baringo honey initiative and according to the CEO, Pauline Ngari, “This is the best investment for the women and the future is bright. We are looking at starting a bee farmers honey processing center that will bring together all the beekeepers to act as a platform for advancing their needs as well as create more capacity to enhance and increase honey production for the market.”
So far the honey initiative has over bee keepers, 80% being women and has seen the distribution of over 250 modern beehives.

Read more on the BHVC elected delegates on this link 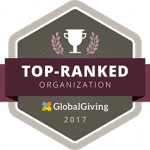 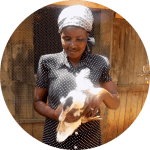 Rabbit farming, an unexploited ‘Goldmine’ that is greatly overlooked.
0 Comment