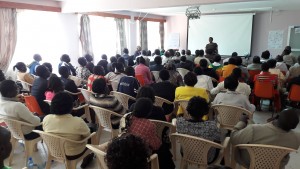 BARINGO BEE FARMERS TASTE SWEET SUCCESS FROM BEEKEEPING
AMBITIOUS PROGRAMME
Since the inception of the Baringo Honey Value Chain (BHVC) in August 2015, the initiative has become the game changer for thousands of bee farmers in the region who previously relied on small agro-based economic activities for income. Some also practiced livestock farming which is the major economic activity in the county. However, the entry of the honey value chain initiative by Hand in Hand Eastern Africa promises a bright future for the farmers. Currently there are 1,436 bee farmers in the program and more potential bee farmers are expected to join as time goes on. The initiative is pegged on a theme of commercializing beekeeping for sustainable livelihoods.
So far the organization and the farmers have invested close to KES 3,000,000 in mobilizing and training bee farmers on profitable beekeeping practices, as well as buying modern beekeeping equipment that includes 527 Langstroth hives, 13 honey harvesting kits and 3 extraction machines. While Hand in Hand Eastern Africa has been training the bee farmers on business and financial management, the Africa Beekeeping Limited (ABL) which is the implementing partner in the project, has been instrumental in providing technical training and advice on modern beekeeping methods. Since been rolled out, there have been four honey harvest seasons which has realised 334kg of honey cumulatively. Unlike the traditional bee hives which the bee farmer used previously, the Langstroth hives have enabled the farmers to double up on production and also produce high quality honey. A single beehive produces between 15 and 20 kilogrammes of honey in each harvest. Usually, honey harvests are done after every three months. One kilo of honey costs KES400 and hence a single beehive earns a farmer between KES18,000 and KES 24,000 annually. ABL buys honey from the farmers.

The farmers are now able to cater for their families’ needs, including taking their children to school. The youth have also ventured into the enterprise and some of them own atleast between 3- 6 modern beehives whilst others have taken up the role of inspection of hives, honey harvesting transportation of super boxes to extraction centers. This has kept them from vices such as crime and drug abuse.

FORMATION OF A BEE FARMERS MARKETING COOPERATIVE
Cooperative development in many countries has shown that farmers who are effectively organized can benefit from aggregated links to markets and services, from accessing centralized services that can help them achieve higher yields and higher incomes, and from speaking with a collective voice to advocate for their needs. With access to market being one of the most difficult challenges, the role of co-operatives in helping them to exercise economies of scale is increasingly important. Through co-operatives, farmers can attract traders and institutional buyers, and increase their negotiating power.
Hand in Hand Eastern Africa recognizes that for the initiative to be smooth sailing, the bee farmers must have ownership in the running of the marketing cooperative once it is formed. It is also an exit strategy for the organization. Steps to set up the cooperative are in top gear and in February, the members elected officials in a free and transparent process, who will be charged with the management of the cooperative. First to be elected were 30 delegates from the three implementing branches namely; Mogotio, Eldama Ravine and Kabarnet. The 3 branches elected 10 delegates each based on the number of beehives that an individual owns as well as based on the number of beehives in an area.

From the 30 elected delegates, each branch then went ahead to elect 3 people who would be in the executive committee. The 9 executive committee members then elected a chairperson, a vice chair, a secretary and a treasurer who will play a key role in steering the management and leadership of the cooperative. The remaining 5 members of the executive committee then elected 3 members; 1 from each branch who will be members of the supervisory committee. The supervisory committee will facilitate the final steps of the Co-operative society’s registration and to set up sustainable infrastructure for the Co-operative.
AFFIRMATIVE ACTION
Cooperatives are generally considered powerful vehicles of social inclusion and political and economic empowerment of their members and this places cooperatives in a unique position to ensure and promote gender equality. Women form majority of the bee farmers in the project hence its vital for their inclusion in decision making and leadership roles. In line with this, the members elected the below women to different leadership positions in the cooperative. It is expected that the women will give their meaningful participation and ensure that their voice is heard.
Belinda Kiplagat was elected as the Chairperson and Joan Kilel as the treasurer.
Youth and men have not been left behind as Wilton Kimambei was elected vice chairperson and Edwin Ng’etich as secretary.
David Maina, a cooperative Officer in Baringo County oversaw the election of the delegates and has been guiding towards the registration and setting up good governance structures for the cooperative.
HiH EA outgoing CEO Pauline Ngari says “I congratulate the beekeepers under the project for their resilience throughout the 2 years journey to their Canaan “Baringo Honey”.
The ultimate goal of these beekeepers is to produce a competitive export brand of honey from the Baringo County beekeepers. This is possible with consistency and persistence of both the beekeepers and all the stakeholders within the County.
In the next 2 years, HIH EA & ABL plan to continue supporting the newly elected board of directors to guarantee a stable leadership/management foundation. The support will also be extended to the beekeepers on the actual beekeeping activities to help attain an optimal level of honey production by the BHVC Co-operative Society for a sustainable market.
With the support from the County Government and commitment by the beekeepers the project is set for great success in increasing family incomes, improved livelihoods, increased employment opportunities, generated revenues for both county & national governments as well as increased cash flows within the County among many other socioeconomic benefits. 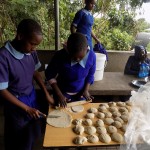 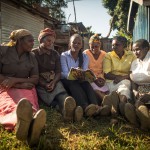 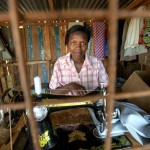 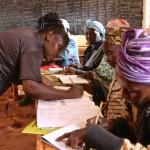